Well, it’s official. I’ve had to censor a comment for the first time to mythopoetry.com facebook. I must admit I do not know all the poster wrote because I did not read most of the comment. I stopped reading when the poster’s point of attack (yes, attack as in warring) was the intellect, meaning my own. This means I stopped reading at the end of the second sentence. The poster actually used the word “intellectualize” which has culturally a negative connotation in which thinking is somehow bad. To that I simply say, “Bull!” If you do not bring your intellect into Cupid’s Forge, you will not recognize the thought in the heart that is speaking in tongues, the other language in the language of the other.

The “other” language is metaphor which allows for new patterns of thought (yes, thought) to emerge between highly organized kinds and systems and highly chaotic, disorganized, broken down kinds and systems, say politics for one, where people have been refusing to work together in Congress for the common good.

Do not be fooled by the intellect at work. The necessary “intellectualizing” is not emerging from the brain. No, this thought is emerging from the heart. The heart is a metaphor for the inner life, i.e. Cupid’s “forge”. Soul heats up.

Something smoldering in the forge in the heart, the inner life, carries felt-for-senses repressed, oppressed or suppressed by the very attitudes inherent in my poster’s attack seemingly to me just as inherent in the way Congress won’t work together. They work together anyway a necessary friction smoldering in the forge of life. But let’s challenge that thinking on thinking meant to demonize it and repress intellect even further so the intellect of the inner life really is “dumbed” down in the other sense of the term “dumb” rendered as silenced.

If I personify this soul and call her Thalia as did the Apollonic era of western civilization in assigning the highest metaphor to its collective soul’s inner image-pattern as “the music of the spheres,” this dumbing down renders the soul of Thalia as Silent Thalia. It now means you cannot hear her inner life singing.

But rather than go in this direction and speak to how an image of psyche is distinctly not a symbol, under conscious control, up for dumbing down and other uses in how we use our language, I will try to address posting to mythopoetry.com’s social network page in another way. Please bring along your intellect.

The notions in our attempts to understand the dynamics of people in community with each other and organizations in community with communities of people contain our attempts to understand the significance of patterns. Inherent in all patterns is complexity. Patterns offer complexity, not predictions. We use the pattern (or ought use the pattern) in the work we do. This pattern emerges in the diverse domain of our lives. Simply put, the pattern offers us rules to live by. Not so simply put, the pattern happens at different levels and between different groups throughout the system. And so the pattern is the go to place when we are stuck. I am grateful to the poster now in the sense that I had to do some thinking. My thinking had to return to the pattern, the go to place where Cupid’s arrow stuck.

One thing about posting to this social network you should know. Respect the points of view of people here and do not attack their intellects. Post your perspective without attacking theirs. Link the felt-for-sense of your thinking to sources so that anyone may participate by checking what is said against the source used to say it. If you have an opine state the opine in a manner that is not devaluing to the original post to which you are responding. People reading are free to think for themselves. It is with the felt-for-sense within the heart of your statement people are interacting. So place your effort there. Remember that when you are using internet you are in a space of irreality, a continuously now. This ‘space’ is setting up interactions not only with environments but anti-environments; you are not safely contained behind a wall of implicit bias specific to your personal religious belief, politic, gender, race, etc. You are exposed to every kind in every way at once. That’s Cupid’s Forge these days. When in virtual space, you are in a complex adaptive system.

Patterns are behaviors or events that repeat themselves over time and space. Patterns in time may be seen in cycles of economic growth, changes in customer requirements, and shifting sources of competition. Patterns in space may appear when teams in different places work together on a shared project or when information is accessible to part, but not all, of an organization. Different types of patterns influence organizations in different ways.

So what kind of pattern are we when participating in the irreality of the internet on a social network like facebook under the banner of mythopoesis, the term from which “mythopoetry”, “the poetry of myth in myth and poetry”derives?

The challenge now is to work in the space between very highly organized systems and chaos systems, systems where there is little agreement between kinds and no will to come to terms. HSDI calls this third space

a self-organizing landscape. Here is their diagram. You can see what to do and how to move from an unorganized landscape to a self-organizing one. You watch for the pattern setting up the core values through simple rules.

When I saw this poster’s demonizing use of the root term, “intellect” I was in no friendly mood. I would have banned this poster from becoming a member here, if they became a member to post something in the manner in which they subsequently did. This is because the poster posted in a way that violates the trust I place in members to honor the intellect that is the thought in the heart of another’s narrative.

I’ve been wrestling with my own response to this poster, a necessary one, to preserve the communal trust. This part of things is most fortunate. The image of psyche that came to me was the migratory patterns of birds. This image shows up as central to understanding human complexity dynamics over on the HSDI website connected to core values in simple rules. You can go read that for yourselves.

But, for now when posting, keep in mind the simple rules of migratory patterns the way birds teach us these: Fly toward the center of the flock. Match the speed of the others. And for gods’ sake, avoid running into the other birds.
Posted by mythopoetry at 10:39 AM 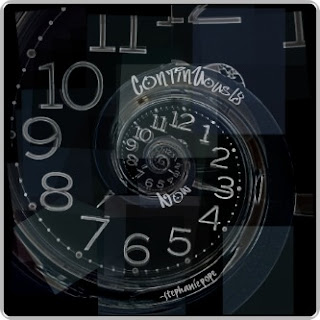 
©2012 Continuously Now stephanie pope mythopoetry.com
Posted by mythopoetry at 8:09 AM