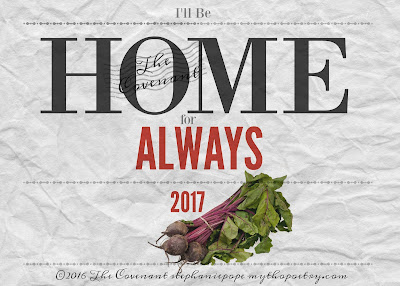 When a figure is sacrificed in the planting culture, that figure is the god...from whose body the food of the spirit comes. There is a sublimation of what originally was a very solid vegetal image. He [the figure] is on Holy Rood...
the second tree in the garden of Eden....  The tree of coming back to the garden is the tree of immortal life.                     -Joseph Campbell,  Power of Myth/ mythic sacrifice


Gardener again, dark earth clinging to her hands
she stood that day just on the outer edge
plucking crimson beets from the garden, enough
to bind together in a bunch.  But when she saw us
coming up the drive, she raised it like a torch

over her head.  It was a triumphant move
her calloused hands helping an 87th harvest
into high fulfillment.  Seeing her own red flame lifting life
like a torch I had a hunch & enough that when I saw her
defending life's threshold just then, that's just what I said.

A light bringer holding salutation how is it I find you torched
a cultivation yourself, ripened with harvest?  In offering
your small, red sacrifice, the low, hyperborean scents still hold
how you reconcile in me a god's former identities; you are
almost enchanted or I am by the sight of you.

Actually, that is what I wished I could have said to her
but I didn't know how or about red beets in that poetic way
I know red beets now.  Torch and twin, Phosophoros
light bringer and Dadophoros, light bearer, the nature of your
secret phrase unspoken, passes inward.  And, in passing

something I am too, passes away.  I might always only come
to life made up in lines which do not exist; how yours lit mine
a blaze that day; how the smell of fresh beets harbor still
this low phrase, one humus clung, its autochthonic rhythm
sprung fresh as rain.  That we may be gardeners again.


1. One important quality of red beets has to do with their color. What gives the red beet its red color belongs to remarkable antioxidants called betelains.  Betelains give their red staining quality to beets.  As a mythic image the red staining quality of betelains is linked to the kiss of Aphrodite and cosmetics.  Used in the 19th c to provide Victorian ladies their pretty red lips, applying betelain stain to the cheeks gave them a proper Victorian blush.  Applying this stain to the cheeks, lead, too to the new phrase, “red as a beet!”

2. Another important quality of red beets has to do with their scent and taste. This scent and taste is what causes folks to either love them or loathe them.  Red beets carry something desirable yet also excrescent, unusual (ab or ad normal―an outgrowth usually unwanted) in their soul still coveted even as it seems unattainable.  The opening up of this space between the wanted and the unwanted is the poetic sense here.

What gives to the red beet its scent and taste is a substance called geosmin.  Geosmin is responsible for that fresh scent in your garden after a spring rain. Humans are very sensitive to geosmin even in very low doses causing this extreme, emotional, wanted-unwanted response to the red beet.  It seems the scent of the beet strikes a specific organic pose linked to the dark, sweet, rich earth, " rich earth" itself invoking the chthonic dimension.

Even linguistically we see a language bond between this image of the dark earth in the word humus, Latin, meaning earth and the Latin, humanus, meaning man also rooted in the  “hum” in the word,  exhume,  meaning to uproot or dig up.

Often said of bodies after their proper burials, exhume translates as ex (out of) + humare, bury, from humus, earth or chthon; this gives that sense of something that isn’t a thing but ‘soul’ being unearthed.  Something not dead, and more like an eternal newborn, this “red” is always green.