DEMETER OF THE HARVEST: Searching For Returns Within Feminine Consciousness 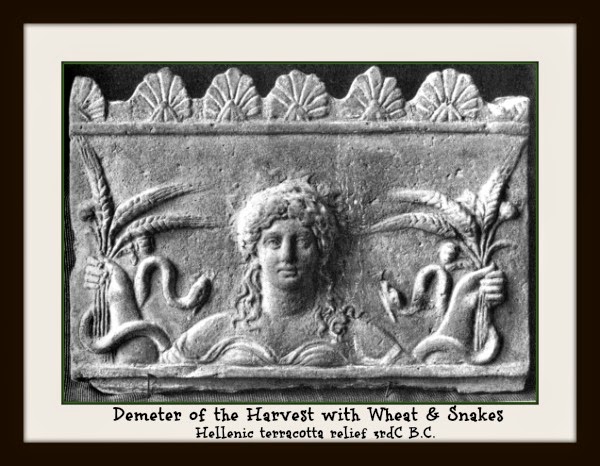 For the Homeric Hymn To Demeter and translation and also for a compilation of various perspectives see http://earlywomenmasters.net/demeter/myth_033.html
Posted by mythopoetry at 9:03 AM


a thought's heart
an impossible appearance

Posted by mythopoetry at 6:55 AM

NOT FAR FROM CALYPSO'S EPIC ISLE

MUSE, CALYPSO, OF WE, THE PEOPLE
SPARED BY OUR WARS AND THE WAILING SEA

SING CALYPSO PASSING IN ROBIN
SING OF THE MANY-TURNED MAN

1.  AEAEA is the Greek name for Circe's Isle. Circe's Isle lay along the way to Persephone's gate leading to the underworld. AEAEA is also another name for Calypso, which means "hider" or
"hide-away".

2.  Regarding the mythic imagination and image of the robin in folklore, you will find a bit of interesting ideas that cluster around the image in the blog, "From Bedroom To Study" see Monday, 10 December, 2012, http://from-bedroom-to-study.blogspot.com/2012/12/the-fabled-folklore-of-robin-redbreast.html

3. Wiki also provides the following cultural depictions of the European robin with christic gloss, Robin Redbreast and the iconic, Norse image of robin as a storm-cloud bird:


The robin features prominently in British folklore, and that of northwestern France, but much less so in other parts of Europe.[30] It was held to be a storm-cloud bird and sacred to Thor, the god of thunder, in Norse mythology.[31] Robins also feature in the traditional children's tale, Babes in the Wood; the birds cover the dead bodies of the children.[32] More recently, the robin has become strongly associated with Christmas, taking a starring role on many Christmas cards since the mid 19th century.[32] The robin has also appeared on many Christmas postage stamps. An old British folk taleseeks to explain the robin's distinctive breast. Legend has it that when Jesus was dying on the cross, the robin, then simply brown in colour, flew to his side and sang into his ear in order to comfort him in his pain. The blood from his wounds stained the robin's breast, and thereafter all robins got the mark of Christ's blood upon them.[31][33] An alternative legend has it that its breast was scorched fetching water for souls in Purgatory.[32] The association with Christmas, however, more probably arises from the fact that postmen in Victorian Britain wore red jackets and were nicknamed "Robins"; the robin featured on the Christmas card is an emblem of the postman delivering the card.[34]
In the 1960s, in a vote publicised by The Times newspaper, the robin was adopted as the unofficial national bird of the UK.[35] The robin was then used as a symbol of a Bird Protection Society.[36]

We would rather be ruined than changedWe would rather die in our dreadThan climb the cross of the moment& let our illusions die.
Posted by mythopoetry at 8:41 AM 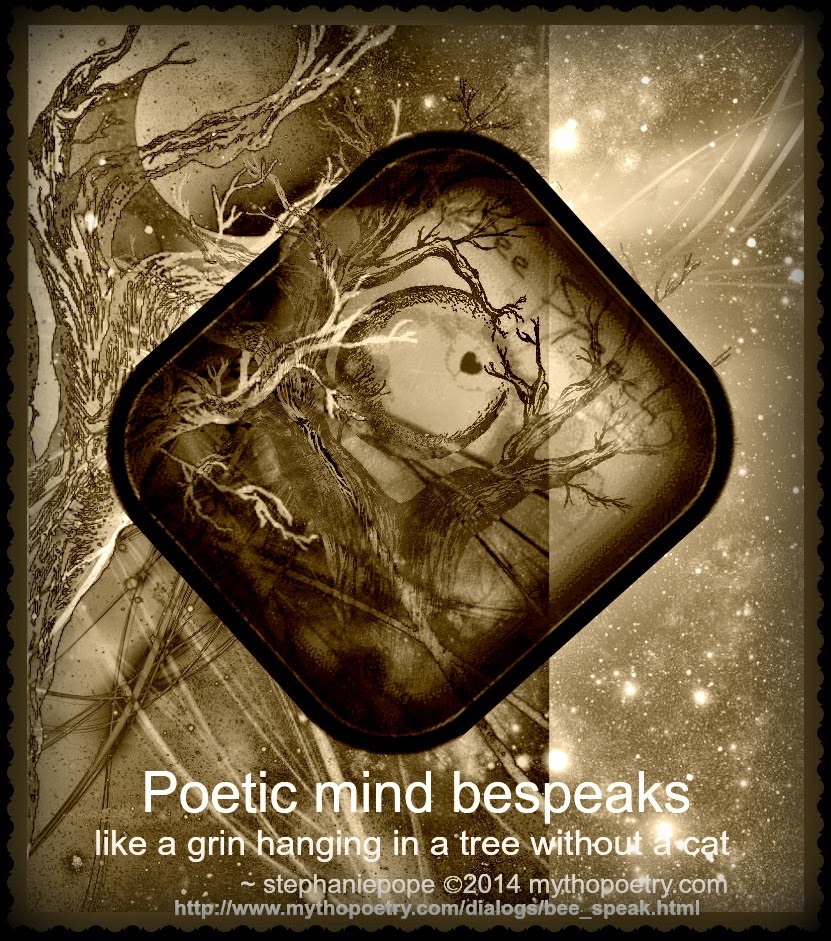 One of my fav words is "bespeak". Bespeak means to indicate "as if". Bespeaking is an as-if language that chalks or marks out boundaries of things long before "things" ever actually appear. The image to keep upper most in mind in the word, "bespeak"  is that of a finger pointing for in its Greek root is deik, meaning digit, like the forefinger. There is a Greek god in the word, "bespeak" too. You can read more about that divinity, the holy action of language and fantasy's humor shaping poetic mind in the presence of horror and dread by clicking here.


Poetic mind may express and does express a fantasy image representing interiority without the image having to have interiority or exteriority to express and/or give notice to its reality.
Posted by mythopoetry at 5:20 PM 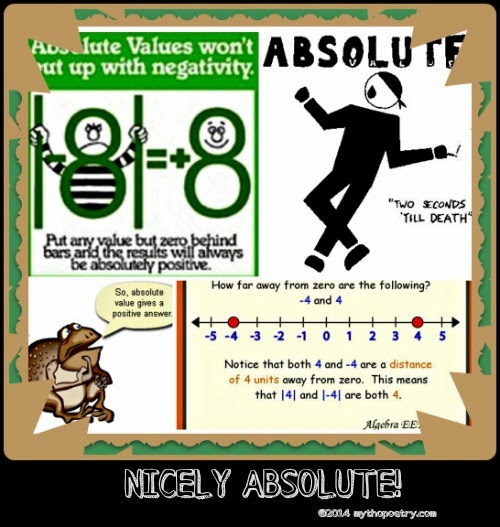 
a nice distinction undoes it
nicely absolute is absolutely nice

the collage is made from images taken from the following learning-math sites: http://tedfelix.com/TedChain/avalue.htm

Posted by mythopoetry at 8:28 AM

WRITING TOWARD THE BLOOM IN THE GENOME

Listen, my heart, as only saints have listened: until the gigantic call lifted them off the ground
~Rainer Maria Rilke, Duino Elegies/First Elegy


Pretty Pretender, thy artisan, soul-making
neither fails nor achieves in the same way
as this world of facts

We conceptualize self in terms of dynamic multiplicity of relatively autonomous I positions in an imaginal landscape.  The I has the possibility to move, as in a space, from one position to another in accordance with changes in situation and time.  The I fluctuates among different and even opposed positions.  The I has the capacity to imaginatively endow each position with a voice so that dialogical relations between positions can be established.  The voices function like interacting characters in a story.  --Hermans, Kempen & van Loon, "The Dialogical Self"