And, No One Knows


whatnottery for pottery
whatnot shelves

dreams that flow in curio
records a band of selves

itself alone to fill a shelf
of whatnot shelves

For more history and a photo of L.M. Whatley & The Whatnots visit Wired For Sound Blog

Email ThisBlogThis!Share to TwitterShare to FacebookShare to Pinterest
Labels: L.M. WHATLEY and THE WHATNOTS, micropoetry, MUSIC 1964, mythopoetics, OHJ, WHATNOT


The love in the blood of our
(m)other tongue
knows how we walk the talk *in*.

Throughout our other, soldier-as-poet word
our mothering metaphor repeats "Dear Mom"
to us, poetics soft, enveloping―winedark.

Enliven us, spirit of deep alterity; pour
libation and sing: sang (masc.) in French
sangre (fem.) in Spanish red. *These*

pour back through black to us the blood
of our _other, feminizing word
poetizing being.

1. Blood in French, “sang”, and blood in Spanish, “sangre”, carry gender distinction, something Bachelard, in his “Reverie on Reveries” intimates will color reveries. Bachelard says the following, “The difference of gender overturns all my reveries. It is really the entire reverie which changes gender.” (see ch 1, “The Word Dreamer” in The Poetics of Reverie (Boston: Beacon Press, 1971, Daniel Russell, trans.) Concerning the reversals of masculine and feminine values in passing from one language to another Bachelard turns to Simone de Beauvoir’s Second Sex to talk about the femininity of words saying “The woman is the ideal of human nature and ‘the ideal which man posits opposite himself as the essential other; he feminizes it (italics mine) because the woman is the palpable figure of otherness. (altérité) See p.35. Bachelard is pointing out the internal oneirism in language and the importance of being faithful to the “in”-sight/site/and cite operating between imagination and consciousness, something Vered Lev Kenaan’s introduction to Pandora’s Senses also notes by saying “…the ‘I’ cannot be understood without a ‘you’, and the masculine is dependent on the feminine.  This suggests to me that perhaps it is that the poetizing of being is dependent on this poetic time and poetic space in its feminizing “in” site/cite insight operating between imagination and individuating consciousness.

3. In Pandora’s Senses (Wisconsin: Univ. Wisconsin Press, 2008) Vered Lev Kenaan notes “Feminine repetition transposes the said into a new order,” p. 4. Pandora’s Senses gathers some sense using the myth of Echo and Narcissus saying “The said meets itself (italics mine) in the form of that which is heard. Echo allows the speaker to identify the utterance as his own but in objectifying the act of expression, (recall  de Beauvoir’s “it” under Bachelard’s notice in footnote 1) she (Echo) makes it clear the utterance no longer belongs to its original owner. Hence… the repetition scene constitutes a locus of self-enlightenment.

4. For “immanent immortality” and the soldier metaphor see Alan Badiou, The Contemporary Figure of the Soldier In Politics and Poetry, UCLA, 2007.

6. photo credit: Natanis Davidsen has photographed new life emerging out of burnt, or scorched earth. Sangria soil sparked blood and inner light lit up the soldier as poet living underneath my own imagination.
For permission to use photo freely see http://www.creationswap.com/media/5995

Posted by mythopoetry at 1:30 PM

WHAT PRICE THE PLOT 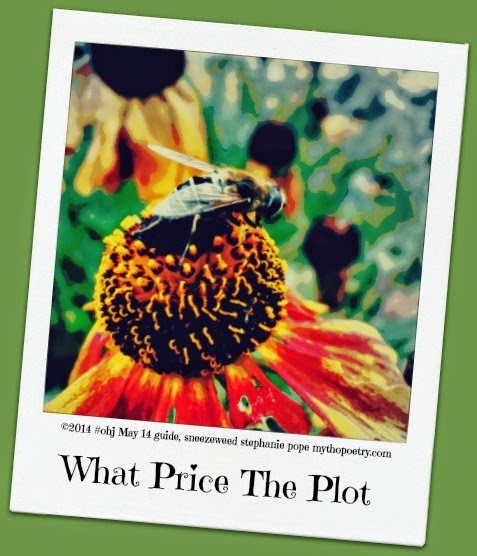 WHAT PRICE THE PLOT

OLD MAN SNEEZE
WEED-POINTS HIS NOSE
WHAT PRICE THE PLOT
THE BEE, HIS LOT
THE GUIDE, HIS POSE


©2014 stephanie pope mythopoetry.com#ohj May 14 guide, sneezeweed
Posted by mythopoetry at 8:23 AM


There Was a Garden

A pun of purity, artistic matters and
the mastery of masters

You lie in bed
there, crucified

a matter of being mastered
(not exactly replicated)

a matter of a manner of
perspective

Look at the impact―the imp act!

a pun
of purity

Look at the reference
to soul's point of view

where no one has ever been
laid

here in the personal genius
the sweating Orpheus

bring this
to life

Posted by mythopoetry at 1:13 PM