MORE VAGINA SPEAK: IN THE NAME OF THE FATHER

"Paternalism" comes from the Latin pater, meaning to act like a father, or to treat another person like a child. ("Parentalism" is a gender-neutral anagram of "paternalism".) In modern philosophy and jurisprudence, it is to act for the good of another person without that person's consent, as parents do for children.

Paternalism when applied to the citizen status of women, if it appropriates a woman’s citizen right to participate equally in self-government, for example, passing laws which may not reflect social self-consent to control access to abortion, oral contraception, gynecological healthcare insurance, etc., may reflect not consensual self-paternalism but rather minoritarian or majoritarian tyranny. There is a difference between government and self-government in shaping the laws you and I will go on to live by. Consider this important insight from Peter Suber’s essay,

In a democracy, paternalism in the criminal law can to some extent be construed as self-paternalism. If "we" made the laws against usury and gambling, then "we" are restraining only ourselves. Before we justify these laws as self-paternalism, however, we must ask whether we are describing our democracy accurately or platitudinously. If laws to protect citizens from themselves were made by one non-representative faction, class, or bloc, or if the electoral process is distorted so that the outcomes of elections do not represent true social consent, then we may be dealing less with consensual self-paternalism than with majoritarian (or even minoritarian) tyranny. To overlook this possibility would justify paternalism by turning a blind eye to one of its most objectionable features.

In an even larger way, you can see an example of paternalism’s conceit operating right now in Mitt Romney’s remarks regarding “the 47%.” Paternalism works unfairly a redistribution of power over all citizenship status, not just female status. In western psyche’s mythic inheritance paternalism’s moral code seems to begin in a religious philosophy of kings and prophets (not to mention profits). And then, as times moved on, times changed. Or, to say this another way, *gd* took on the image of god, the creator likened to that of “clockmaker”.

When *gd* Was a Clockmaker


Set within this context the Constitution underwent shaping in the 18thC giving face and body to the law of our land. The Constitution is not grounded in the Bible per say. Ideas forming constitutional language are influenced by the image of god as clockmaker inherent in mythic patterns of deism in an epoch of enlightenment and work between images of many gods not merely the one god of monotheism. (see http://www.gilderlehrman.org/history-by-era/age-jefferson-andmadisonreligion/essays/thomas-jefferson-and-deism#_ftn1). These images of the many gods are none other than inborn patterns of the racial archetype of the specie. You don’t have to be a deist, nor believe in deism over Christianity or vice versa, for these inborn patterns in the psyche to be operating or for their affects to have effect. One resultant constitutional effect is the upholding of separation of church and state. Within it is the premise that when majority rules take shape, the lawgivers must protect the interest of minority rights to life and to liberty and to preserve citizen ability to pursue a happy life to the fullest extent.

Once more let me say it. The Constitution is grounded in the idea that whoever rules must work on behalf the equal rights of all the people not just their own preferred kind (religion, business interest, cultural ethnicity, age group, city, neighborhood, etc) The idea that underlies the Constitution, something the President, before he/she can take office must vow to uphold, is based in majority rule with respect the citizen status rights of the minority; these rights are guaranteed equal under the law. Congress, under the sway of the 2012 tea party entrance into lawmaking, has been using the tactic that redefines what a term means to narrow meaning and pass law that does not respect certain citizens’ rights to equal representation. They are appropriating and speaking on your behalf against your right to equal coverage to health insurance, opportunities for meaningful work, equal access to affordable education, etc.

Posted by mythopoetry at 5:40 AM 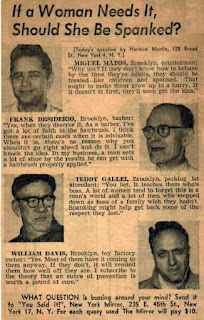 THINGS MEN SAY *ABOUT * WOMAN : Pt 1
If you grew up in the 1950's, the attitude published in the New York Daily Mirror article was prevalent among American men.  But, the old form daddy knows best in that old time religion is no answer to today’s currents of social, spiritual and economic distemper. Nor, judging by the antics of conservative Christian politics in America these days, should it be.  I use the term “Christian” loosely because the religious politic of the Christian right gives body and face nationally to what seems an ailing imitatio Christi dragging behind it a terrible lack in ethical compassion for what ails us as a people. At root, an image of psyche, it cannot represent all of Christianity itself nor the wholly psyche and Jung may be right when he says, “In the long run we worship as a divine example a man who embodied the deepest meaning of life, and then, out of sheer imitation, we forget to make real our own deepest meaning―self-realization….”[i] If I and Daddy are one in our deepest most meaningful form governing forms, the governing form nearest to this may well be at work in terms of a consensual self-paternalism reshaping the American cultural myth. The shadow in it would be working, too. And that tyranny would be well worth challenging. That said,  I know as I sort among senses for things as they are in the soul of the American polis, "man", alone, (meaning "men") can never speak *to*  the idea, “woman" anyways.

What Did She Just Say?

I mean “man”, in terms of male gender, cannot define what woman is and wants for herself as a self-determined kind in body, spirit and soul. He can only speak *about* woman and woman here takes on the meaning of *an image* he has of what all women ought to be, i.e. a gender construct. But, she is the boss of “she”; he is not the boss of “she”. In other words, “he and she” in their belonging together will not work as an oppositionalism anymore. *They* want to build in life something else together these days.

I’m talking about soul, of course. Today both men and women want better soul-making. You see, in terms of material imagination and archetype, just as *an image* of god cannot contain all of what is meant by the word, *god*, so, too, what is *man* and what is *woman* cannot be contained by the image one has or the image one’s society has for all that *man/woman* is. Should you appropriate what speaks *to woman* to speak about her you will have already dumbed down and appropriated her voice speaking for itself.


To Form A More Perfect Union

If one does this in religion, i.e. dumb down the image of god to lay claim to all god means one is practicing idolatry. Therefore, and to avoid doing that in the name of religion, the religious imagination rewrites god by spelling god’s name thusly: “gd” [as in the Hebraic inheritance, JHWH.] Missing letters help to make this point stick and written thusly help us to remember it. One’s own “god-image” cannot speak all *gd* is and means.

Something like this is true for you and I now as we struggle together on national concerns relating to each other how best to (re)form a more perfect national union. Just as woman is not man and cannot speak for all he is, man is not woman and cannot speak on her behalf but must represent her voice fairly and equally and likewise must a woman do this in Congress or the Presidency if elected to represent him. That is because “a man” is not "man", the metaphor  and “a woman” is not “woman”, the metaphor.  The meaning carried in metaphorical language representing "sex" and sexual union to our specie as carried in the biological archetype as metaphors open to reveal themselves is much harder to grasp. So let’s write woman, *wmn* and man, *mn* and the one citizen body lets write *mnwmn* to keep this awareness affirmed.

Furthermore, the right to life liberty and the pursuit of happiness in our Constitution is what representation in citizen body vows to uphold. It is not the individual implicit bias of a man or a woman's interpretation once elected to office or superegos of special interests, religious Christian groups notwithstanding. Any time folks try to dumb down and redefine terms to coalesce governing powers in the hands of special interests to pass law that does not reflect true social consent their thinking is guilty of paternalism. There are different kinds and paternalism in and of itself i.e. consensual, self-paternalism seems to me to fall closest to the notion, self-government.

Posted by mythopoetry at 5:54 AM

Email ThisBlogThis!Share to TwitterShare to FacebookShare to Pinterest
Labels: parentalism and paternalism, prophets and profits, the 47%, vagina-speak

The Giving Body: When Absence Helps

Fur to amber, vagina speak is like a rubbing stone
and in a kind of fixative, the artist’s heart
to a necessary kind is hair
but with the h-sound marking her invisible scent―
an inaudible absence-presence
right where one feels one’s own
standing on end waiting for thunder.

Pole to pole electrons carry in such "nesses" what’s missing
static magnetics, language presenced h’ard and h’art ―the un
“heard heart” shot through not hit and not hit, the deep image
unknown, carries in the air and in the opening h-space an “e”
[as in ecstasy] longed for and missing...X'd [...]; it marks the spot.

And when absence helps, missing letters untouchable
this heart of hers relinquished to what's hers
her own pleasure...and unowned!
behold it in the air
and in her beheld
be held beautifully.

It’s no secret why Zeus spent so much of himself
weighting on a woman; poets can only know secrets
already known in the soul, left unuttered and nakedly hanging
like scents in [h]air where thunder cracked.

Posted by mythopoetry at 8:26 AM