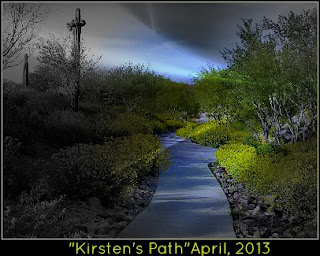 walking along, the pair
made it half-way round
the path in the park, when he
said to her, “you ought be called Kirsten”
(pronounced cursed-in)

descensus, she thought
descensus carried inward (!)
and the name, she thought
pronouncing it the one way
carries in ascent a souling of the spell in
its mattering, a matter carried hidden―a dis
n-chanted in the soul of its last letter; it makes her think “Christ”, a Kirst’n one, somehow liminal, at work.

Is this where Christ went, she thought
is even now
inward to give Kirsten blessing?

And they have written down this story
so no one forgets what happens; Christ
dies to the affairs of the world and yet
this kind of dying means to die
is to become more alive than ever
Kirsten soul, a keeper to a hidden Christ and
what bodies cursed-in soul, the bride
brings Kirsten blessing.

she says to him then, “I think I see poetry.”

on liminal images/ ex. Harrowing of Hell Latin: Descensus Christi ad Inferos, / "the descent of Christ into hell" (see http://en.wikipedia.org/wiki/Harrowing_of_Hell ), Old English and Middle English term for the triumphant descent of Christ into Hell (ie Hades/Aides, meaning the invisible.)
In other words, these are metaphors in nonlocality) this space/gap lies in between the non-ordinary time in christic Crucifixion and Resurrection bringing salvation to all who die thusly. A Kirsten blessing then involves an image operating in liminality, disappearing as it does into a certain background of historical depth (aka a mythic pattern).

And, in this case, the image’s “desensus ad inferos” disappears into a mythic pattern giving rise and reappearing again in the “poetic body” of the poem.


According to The Catholic Encyclopedia, the Descensus Christi ad Inferos story first appears clearly in the apocryphal Gospel of Nicodemus, also known as the Acts of Pilate, written by a Roman praetorian named Ananias circa 425 CE. As an image in Christian art, the harrowing is also known as the Anastasis (a Greek word for "resurrection"), considered a creation of Byzantine culture and first appearing in the West in the early 8th century.