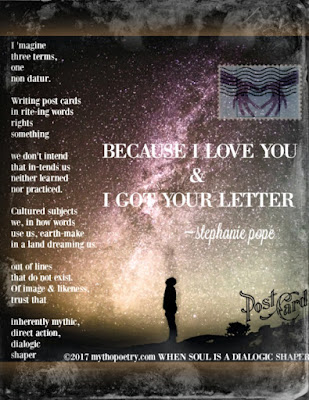 we don't intend
that in-tends us
neither learned
nor practiced.

Cultured subjects
we, in how words
use us, earth-make
in a land dreaming us

out of lines
that do not exist.
Of image & likeness,
trust that

©2017 stephanie pope mythopoetry.com
WHEN SOUL IS A DIALOGIC SHAPER

Posted by mythopoetry at 4:55 AM 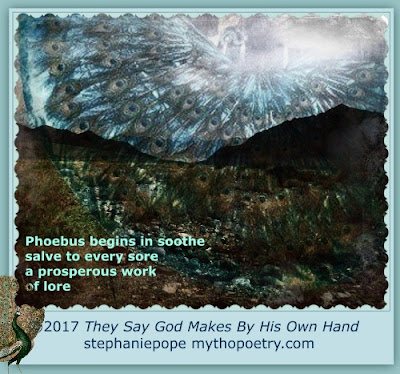 AT DAYBREAK BEFORE THE CHARIOT OF THE SUN APPEARS


©2017 They Say God Makes By His Own Hand
stephaniepope mythopoetry.com
Posted by mythopoetry at 1:45 PM

" 'Poet' stands in for poetic soul already active within the soul of anything. Take the soul of words, for instance. Already at work underlying...." —I love this word! What is the under lying-soul of such poetry doing in all that lying? Poetic soul lies to tell a bigger truth. Poetic soul is polutropos, but like Odysseus, not Achilles. Polutropia is the very source setting up a both and scenario that links soul-making in a way which says truth-telling, lying, poetry and interpretation are all connected in a specific way that shows the very structure of the human soul is as a hidden unity. This "hiding" in both senses of staying hidden while showing up on the skins of things, events, destinies and fates, etc. presents a hidden unity as a multiplicity and this is necessarily so in the making of our humanity towards each other. (see M Davis Lies Like The Truth: On Plato's Lesser Hippias - Taylor & Francis Online) But now, for that hidden unity which is our truth... "Already at work underlying a word's thought is a mythos. There is mythos in logos." The above quote is taken from the prologue to my newest poetry book "Monsters & Bugs" planned for release in 2017. And because this is a mythopoetic blog post, to illustrate this "there-is-a-mythos-in-the-logos" idea let me go to the political cartoon circulating on twitter today. The Trojan-Horsed Trump image belongs to a political cartoon from The Netherlands. It seems to mock America for what some Americans remain blind to seeing. Yes, there is a mythos in every logos that allows myths to operate unconsciously. Mythic narratives belong to comic things and tragic things. Just as one doesn't want to be at the receiving end of a tragic joke, one ought for that very reason pay attention to the under lying-voice in the poetic soul operating now shaping what spirit our America will have been, in representing itself now and for all posterity to come. Let us not live a myth. Let us listen to the deep geography. Yes, even our land dreams through the climate of our times. There is a mythos in its logos that brought us here. It is the myth of a new land and a new kind of freedom best represented by the statue of Liberty. Our deep geography says everything dreams towards a eudaimonia, the fantasy of a fully flourishing humanity. Let us work with that and let that fully flourishing humanity cross back over the Nether Land of our under-worlds.
___________ notes The quote is taken from the prologue to the upcoming Monsters & Bugs poetry series tenatively set to publish sometime in 2017. The political cartoon circulates on twitter 2-22-17 having origin in The Netherlands

Read more »
Posted by mythopoetry at 8:41 AM

SOME LINES WHICH DO NOT EXIST

Yes, it's true!  I #amwriting!   This poetry series has been in the works for more than ten years.  Why?  Because soul work is slow work. You know that encounter in the kitchen?  "Is it soup yet?  Not yet, but soon!

As the book is throwing itself together, I thought you might like a taste.  Got your spoon ready?


behind the thrust
of cutting money, cutting female flesh
cutting family planning
the cost of such a program not as costly
as the insistence upon reproduction
not because people respect life
but to ensure that sheer life literally will have been
while those living must earn a living
enslaved to sustain the appetites
of the corpse law of the greedy for power
and it is the greed that hides the national hole
in the ground calling itself zero