DAILY POEM Creatures of a Day*

©2013 A Tanka To Creatures of a Day In Conspectu Mortis
stephanie pope mythopoetry.com monsters and bugs poetry series


*Creatures of a Day, is a description from Greek culture of men as ephemeroi. The central ideation in the poetic image as metaphor focuses on transitory nature and highlights the loose hold holding life.

By the same token, in conspectu mortis footnotes another way of seeing and telling the story through this hold while keeping the same ending open or enjambed.
Posted by mythopoetry at 8:27 AM

CG Jung and "in conspectu mortis"  [quote] The vision of the world in conspectu mortis is in truth a curious experience: the sense of the present stretches out beyond today, looking back into centuries gone by, and forward into futures yet unborn. [unquote]  see CG Jung: Letters. Volume 2: 1951-1961 Selected and edited by Gerhard Adler in collaboration with Aniela Jaffé.  Translated from the German by RFC Hull. Princeton: Princeton University Press, 1975 p.10, Letter 21, Mar. 1951.

CG Jung calls this a way of seeing the world. "One must look to the past so that life is not frozen in the past."  -stephanie pope, "The Individuation Process".

R. David Edmunds, Ph.D., Cherokee,The End Of The Trail: A Native American View
Posted by mythopoetry at 10:31 AM 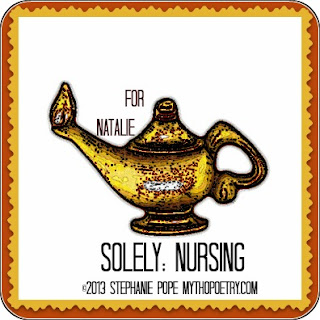 Posted by mythopoetry at 8:52 PM

IN THE CAVE OF HYPNOS

Around the cave of Hypnos in the underworld flows the river, Lethe―Lethe waters  the forgetful of being; Lethe, a water of concealment is also a drink of unconcealment. That is what may be meant by "dying" here. Becoming "forgetful of being" as if one is as a figure in a dream, is the giving up or giving over of the images of one's concealments and not a literal dying―Thanatos (Death) & Hypnos (Dream). It is an activating of a life-making instinct in the depths and also marks the pattern of making what makes a making-life "poetic"... the role the psyche plays in dream is that of a poet shaping "shades".

This depth duo of both Thanatos & Hypnos gives to the river Lethe another hue, a hue casting a reflection a-Lethe (a "Truth" that is an "unconcealment", something reflecting in the waters a revelation of a lively truth or the truth of one's own having lived through something.) And so, one thinks of another painting, Hypnos and Thanatos and also the dynamic duality  "myth" and "poetry" at play in psyche-making.  Is remembering soul's poetic basis of mind the recollection of a forgotten narrative in one's soul-making journey to the underworld and back? Is the "bigger other" story being told the story of a necessary sacrifice of the woman one loves but also loses  to form the woman one is and must live in living without? Is a poetry-in-itself a psyche's "poetry"? Here is one such story. You decide. Orpheus and Eurydice.

Posted by mythopoetry at 5:09 AM

SUPERHEROES IN THE SOUL 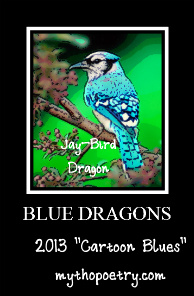 a nude year
nakedly jaded
in a tree

open to its poverty
relinquishes poverty

a great season of years
a great wilderness life

Posted by mythopoetry at 5:47 AM

Happy 2013! Did you make your New Year's resolution yet? This year I promised myself I would continue my explorations into women and humor. As a poet-mythologer that means a mythopoetic exploration where psyche-making seems to open space between mirth and myth.

The idea came to me last evening during participation in a microblogging event, "Toast Pacifica" held for alumni of Pacifica Graduate Institute (see Pacifica Alumni) home to the collected works of Joseph Campbell, Marija Gimbutas, James Hillman, Christine Downing, and others. You can visit a full listing of names and collected works by visiting OPUS Archives on line.


2013: Why Mirth
What is it about mythic imagination and the need for mirth? Could it be somehow that myth's birth and mirth's birth coincide in the same monadic space in imaginal mind? I've already started looking at this early mental matrix.

Mirth's name accorded western psyche in mythic imagination is Euphrosyne. She is one of three Graces or Charites. According to Timothy Ganz she forms, along with her sisters, Aglaia and Thalia, the diaphanous robe surrounding the goddess Aphrodite. (Early Greek Myth, vol. 1 p. 54)

Sure sounds like something archetypally in-formed to me. Perhaps 2013 has all the makings of a "nude" year after all!  If so, the imaginal term coined last night by @Pacifica Alumni, "arsechetypal" has left a just-right imprint to further explore―traces of the old "end-times" along with specular, simulated "spectacular" simulacra, images like the simultaneously unfolding, eleventh hour "fiscal cliff" negotiations. These are left "behind" as the new year begins. These seemings seam traces in poetic psyche's myth-making, fun-loving, festival animal as the old year vanishes into late night, New Year, Toast Pacifica tweets.

In a salute to 2013 now, here's to naked Beauty and the gracefully mythopoetic, circle dancer, Mirth who traced the dancing imprint last night in PJ's EROS and the knowing and loving underneath the blue boy's timely trinitarian invocation. Here's to the winged "makers", mythoplokon, weavers of soul-making everywhere!

Furthermore, here's to beginnings in endings; here's to simulacra, simulation and fictionalizing arsechetypes.

Out with the old, in with the nude!

Happy Nude Year, Everybody!
©2013 stephanie pope, mythopoetry.com
Posted by mythopoetry at 11:57 AM