Bringing In The Sheaves One Sheaf At A Time

1. The Electric Kool Aid Acid Test: Tom Wolfe's book about Ken Kesey and the Merry Pranksters. One of the great books about how LSD invaded America's consciousness, peaking during the Summer of Love. A tribute to Kesey, the Pranksters (including Neal Cassady, Ken Babbs, Mountain Girl and Wavy Gravy), and the whole psychedelic generation. Good insight into how the torch was passed from the Beats to the hippies. It also contrasts Kesey's "up front", experiential movement versus Timothy Leary's experimental, insightful approach to the LSD trip.

The social and political unrest of the 1960s stimulated a resurgence of Mother Goose rhymes as poems of protest. The best known and most censored of these verses are contained in Eve Merriam's The Inner City Mother Goose. 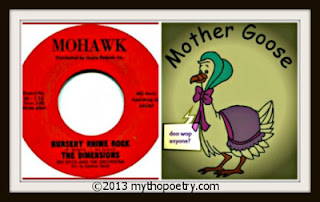 This is the rhyme sung in protest
there in the song sung if by chance
or extenuating circumstance
here in the house that rock built.

These are the foibles sung if by chance
or extenuating circumstance there in
the rhyme that turned to protest
here in the house that rock built.

This is the doo wop Mother Goose
caught in the rhyme that turned to protest
low in the song sung if by chance
or extenuating circumstance
here in the house that rock built.

Posted by mythopoetry at 9:21 AM 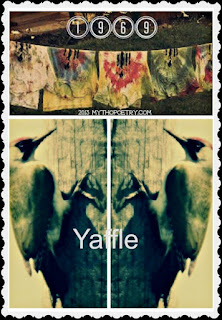 
A spring green rain sensed in 1969,
singing the body

under the clothesline
where the tie-dye hangs
the yaffle sits in the tall May grass.

She yaffles a laugh full, a rainsong
singing the body electric on and on.

And, in this way, I suppose
we are called to yaffle, too.

is a timeless hippie.

On the shelf
a hippie handbook

how to lead such a life (even now).


down inside
the shelf, an image, an etymology


”split”; in coming to sense the apo-sense here:
a spiritual disinheritance, away, afar, apart

an aesthetic arrest in a lighted heart.


[1] See twitter hashtag #OHJ May 22, 2013  OHJ stands for “Old Hippie Journey”  I like the notion of the h-space; H= a space for turning images in psyche-making. this month all month the H-space stands for "hippie".  Each day two new words are given.  This day’s words are “shelf” and “frantic".

Posted by mythopoetry at 9:40 AM 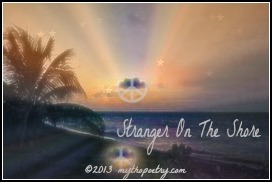 Stranger On The Shore[1]

Stranger On The Shore /lyrics

notes
1. Mnemonics, as a memory aid for modicum which means something in small amounts, bits or, in other words, moderation, links two terms to muse upon, “mod” and “mode”.  Both modicum and moderate have “mod” in common. Mod is slang for modification, mod a reference to the 1960’s youth culture. The mod(e) of knowing from within missed spaces such as that space which lies between two terms is a poetic one.  Who, then, is the poet? the poet here is the one who has bathed in the poetry at work in the depths. Poetry is a mode of knowing what is otherwise missed.  Poetry is a mode of knowing what is otherwise, mist.  Dew and debris; dust and mist, of such psyche’s stuff, a poetry.  Poetry arises from profound and secret depths. This realization led me to look at the myth of cloud people. Nephele (gr) means cloud. In a poetic language- making, poetic words are cloudy words. They are not meant to reveal a certainty or truth but are remaining faithful to a concealment that is true. Poetics undoes the way myths are told and retold. It is from such words, words as metaphor, that what is concealed is made over in unconcealment. And, this would be a bigger thought, a thought rendering the megalopsychia of the metaphor (the myth within) and a specific contact with it which reveals-- but not quite, the metaphor’s “soul”.  Of the various versions told of the myth of Nephele *and all classical sources I know of are provided below* I am specifically caught by one certain line rendered in blue beginning Pindar’s Pythian Ode. Poetic language arises from profound and secret depths and it tells a story never told.

Pindar, Pythian Ode 2. 32 ff (trans. Conway) (Greek lyric C5th B.C.)/ "In the profound and secret depths of her own bridal chamber, he [Ixion] assailed the wife of Zeus. Well is it for a man to take the measure of each deed by his own stature. Unto the full deep tides of woe loves which transgress the law casts a man down, who sets foot there. For with a Cloud (Nephele) he lay, pursuing sweet falsehood, that man of folly. In semblance like [Hera] the all-high Sovereign daughter of Kronos son of Ouranos, this phantom came, this guile, proffered him by the hands of Zeus, a beauteous bane. Thus on the four-spoked wheel he gave his limbs to bondage, his own destruction. From whence is no escape, he heard the message that he must spread to all the world. Far were the Kharites (Graces) when the mother [Nephele] bore--ne'er such a mother, never such a son--her babe of monstrous breed, who had no honour amongst men nor in the laws of Heaven. She reared him up and named him Kentauros (Centaurus), and the Magnesian mares knew his as mate by Pelion's ridges; and that strange race was born [the Kentauroi, Centaurs], like to both parents, their mother's form below, above their sire's."
Pseudo-Apollodorus, Bibliotheca E1. 20 (trans. Aldrich) (Greek mythographer C2nd A.D.)/ "Ixion fell in love with Hera and tried to rape her, and when Hera told Zeus about it, Zeus wanted to determine if her report was really true. So he fashioned a Cloud (Nephele) to look like Hera, and laid it by Ixion's side. When Ixion bragged that he had slept with Hera, Zeus punished him by tying him to a wheel, on which he was turned by winds up in the air. The Cloud (Nephele) bore Kentauros (Centaurus) from Ixion’s seed."
Diodorus Siculus, Library of History 4. 12. 5 4 (trans. Oldfather) (Greek historian C1st B.C.)/ "He [Herakles] had indeed to struggle with beings [the Kentauroi, Centaurs] who were gods on their mother’s side, who possessed the swiftness of horses, who had the strength of two bodies, and enjoyed in addition the experience and wisdom of men . . . The Kentauroi were aided in their struggle [against Herakles] by Nephele (Cloud), who sent down a heavy rain, by which she gave no trouble to those which had four legs, but for him who was supported upon two made the footing slippery."
Diodorus Siculus, Library of History 4. 69. 4 / "The myths recount, that in the end he [Ixion] was purified by Zeus [for the murder of his father-in-law], but that he became enamoured of Hera and had the temerity to make advances to her. Thereupon, men say, Zeus formed a figure of Hera out of cloud and sent it to him, and Ixion lying with the cloud (Nephele) begat the Kentauroi (Centaurs), as they are called, which have the shapes of men . . . others say that it was the Kentauroi born of Ixion and Nephele who were called Hippokentauroi (Horse-Centaurs), because they were the first to essay the riding of horses, and that they were then made into a fictitious myth, to the effect that they were of double form."
Pseudo-Hyginus, Fabulae 62 (trans. Grant) (Roman mythographer C2nd A.D.)/ "Ixion, son of Leonteus, attempted to embrace Juno [Hera]. Juno, by Jove's [Zeus] instructions, substituted a Cloud (Nubes), which Ixion believed to be the likeness of Juno. From this the Centauri were born."
Cicero, De Natura Deorum 3. 20 (trans. Rackham) (Roman rhetorician C1st B.C.)/ "If the Arcus [Iris the Rainbow] is a divinity, what will you do about the Nubes (Clouds)? The rainbow itself is caused by some coloration of the clouds; and also a Nubes (Cloud) [i.e. Nephele] is fabled to have given birth to the Centauri."

Posted by mythopoetry at 8:58 AM