Some other mythos has gripped the psyche of the leaders, if not many of the citizens, of this terrified land. (Dennis Patrick Slattery)

For some time now, I have pondered the mythos of the United States. I wonder what it is and how it is driving our domestic and foreign policies as well as our own individual and cultural psyches.  As we stand on the brink of yet another war with Iraq, oppositional forces of war and anti-war clamor for voice.  I retreat from the debate and try to understand what is going on.  Anti-war protesters take to the streets in what seems to me to be a flash-back of the 60’s, the same old faces and slogans resurfacing in a repetition of some strange pattern, some immoveable force, some circulating complex, even as government forces ignore the growing protests from within and without this country.

It is difficult not to take a stand, not to forego the deep contemplation of myths and movements and the relative ambiguity of a post-modern stance. I know there must be a time when intellectualism requires a moral stand even as the ground beneath that stand pounds and shakes as the god of the depths angrily tries to get our attention.  Politics and myth seem to go together and yet their language is different, the tone and approach seen as oppositional.  I experienced this very recently. In an attempt to explain my mythological lens and approach to a new friend, he angrily challenged my myth-musing with his own political language.  I stepped back and around the discussion, trying to find ways of communicating that opened up rather than closed down the conversation, to explain that our approaches to the discussion were different.  It was difficult. The language did not seem to match. Jungian, Thomas Singer acknowledges this difficulty in his introduction to The Vision Thing: Myth, Politics and Psyche in the World.  Singer writes:

There is an inherent opposition between the kinds of people who are most interested in the inner dynamic of archetypal reality and those interested in everyday politics, just as there is an inherent tension between mythological thinking and political thinking.  Both have different modes of perception of apprehending the world.  They represent different ways of being in the world. (5)

I wonder as I read Singer’s thoughts if the ongoing, repetitive oppositionalism of war and anti-war movements is in fact the inherent opposition of different modes of perception, different ways of being in the world.  I look at my own stance and approach, my own mode of being and wonder: how does one stand archetypally in a world in which a literal war with massive destruction seems imminent?  How does one hold onto a depth perspective and still remain moral?  That is my question, my pondering, my frightening odyssey.  The experience of being gripped in a mythos that is terrified and terrifying drives me back into my way of being in the world – into mythological thinking. I realize that I can only do what I do best which is to look for patterns in things, revealing the psychological and mythological underbelly of what seems to be the realities of the day.  I think that is my only refuge and my strength.  It is my moral ground.

So, as I try to stand on this shaking ground, pondering the depth I will offer in this inadequate essay, some small idea of patterns and mythic material driving the United States with the hope of generating more discussion and building a sense of community.  I know I am not the first to think about these things. Over 10 years ago, psychologist Rollo May wrote about the myths of the U.S. in his book, Cry for Myth.  He entitled the first myth “The Great Myth of the New Land”, writing:

America was to become for the West a myth of the rebirth of humanity, without the sin or evil or poverty or injustice or persecution which had characterized the Old World. (94)

That idea resonates with me as I ponder events since 9-11 with the language of crusades, axis of evil and evil-doers.  Are we, as a nation, caught in a myth of our own elevation in the world, our own savior-like status, our own irrefutable power for good?  As the “New World”, are we, caught in the myth of “the New Jerusalem”?

I saw a new heaven and a new earth; for the first heaven and the first earth are gone, and the sea is no more.  And I saw the holy city, the new Jerusalem, coming down out of heaven from God, and made ready as a bride is arrayed for her husband.   And I heard a great voice from the throne saying: Behold, the tabernacle of God among men, and he shall dwell with them, and they shall be his people…(Revelation 21:1-4)

Certainly, U.S. policy and the current administration seems to circulate around the mythic idea of a new Jerusalem. In September 2002, the Bush administration publicly released a document called The National Security Strategy of the United States.  In the opening paragraphs we find a mission statement that reveals the United States’ mythic status:

The United States possesses unprecedented— and unequaled—strength and influence in the world. Sustained by faith in the principles of liberty, and the value of a free society, this position comes with unparalleled responsibilities, obligations, and opportunity. The great strength of this nation must be used to promote a balance of power that favors freedom. (Section 1, para 1)
The U.S. national security strategy will be based on a distinctly American internationalism that reflects the union of our values and our national interests. The aim of this strategy is to help make the world not just safer but better. (Section 1, para 4)

Policy makers have determined that it is the United State's role in the world based on its power and righteousness to ensure that the world is a better place.  The "New World"  comes with a manifest destiny to ensure that its righteous principles are enforced around the world. Rollo May wrote more about lone stances.  The myth of the new land, the new world, the West, he conjectured, comes pre-packaged with this idea of divine righteousness and a mythic image of the lone pioneer or cowboy out on the range taking the law into his own hands in order to battle for freedom.  This is enforced in our unconscious psyche by popular culture May contends:

Chronicled by an endless number of films, the myth of the lonely cowboy was made to order for Hollywood and the American mood.  The background was the western mountains in their scarlet and purple against the endless ochre of the desert sand.  In the films the courage of American frontier men and women dared all…And there was the final lone shootout between the hero and the villain. Westerns illustrate the love for repetition…we seemed to have an endless appetite for seeing the same theme over and over again as an authentic myth. (97)

I feel this repetition in play as I see the country move around once more to its nostalgia for the 1960’s: peace signs proliferate as anti-war movements square off with a  government making its stand for righteousness and freedom alone in the international community. Curiously, the portrayal of George W. Bush abroad is that of a cowboy politician bent on enforcing his notion of lone justice throughout the world. The United States once more echoes its themes of manifest destinies as the National Security Strategy document reinforces this image of the lone hero/country and justifies its increasingly isolated policies:

In exercising our leadership, we will respect the values, judgment, and interests of our friends and partners. Still, we will be prepared to act apart when our interests and unique responsibilities require. When we disagree on particulars, we will explain forthrightly the grounds for our concerns and strive to forge viable alternatives. We will not allow such disagreements to obscure our determination to secure together, with our allies and our friends, our shared fundamental interests and values. (Section 9, para 18)

I recognize that there are multiple myths working in our culture and this small essay cannot convey their complexity. Yet I feel compelled to make a moral stand here. Perhaps the earth-shaking that is going on right now is a reminder to all of us from that god of the depths – that the true danger we are in is the mindless repetition of unrecognized cultural myths and unconscious circulating complexes.  Perhaps my moral responsibility right now is to merely be a mythologist.

Posted by mythopoetry at 6:08 AM 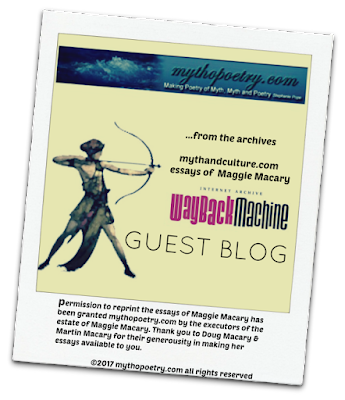 This January, 2017 mythopoetry.com is introducing guest blogging to mythopoetry’s myth & culture blogspot.  Many of the guest bloggers this year are affiliated with the arts and are cultural mythologers (my term for this mode of being in the world) or, as many guest bloggers like to refer to themselves, cultural mythologists.  All, in some way, have an affiliation with PacificA Graduate Institute where they either teach, taught or did post graduate study.

Given the political shift in the direction the country is headed after the election of 2016, and before knowing myself what the guest bloggers who’ve graciously accepted my invitation to guest blog have to say, I thought it might be interesting to journey with the help of the Internet Wayback Machine, aka, the Internet Archives, and revisit how one of the early internet cultural mythologers, Maggie Macary (mythandculture.com)  ponders myth and politics just a few years after 9-11 during the republican era of the George W. Bush presidency.

One thing which struck me as relevant and the reason for beginning with Maggie’s reverie written and published initially in January, 2003 is its opening quote.

The author, the late cultural mythologer, Maggie Macary, Ph.D. is a student doing her doctoral research and the person she is quoting is her doctoral advisor, Dr. Dennis Patrick Slattery. The opening quote to Maggie's "Manifest Destinies" republishing here this Sunday is taken from Dr. Slattery's essay, "Seduced By Peace" first published to one of the earliest of the on line cultural mythology literary magazines, Headline Muse, Dr. Laura Shamas, editor and publisher.
(Slattery, Dennis Patrick. "Seduced by Peace." Headline Muse. 27 January 2003.  headlinemuse.com/Culture/seducedbypeace.htm.)

Although Headline Muse, e-magazine is no longer available on line nor are we able to access it through the Wayback Machine's portal, it so happens, Dr. Slattery is a first contributor to the 2017 Guest Blog Series.  His upcoming blog ponders mimesis and painting. It will publish this March. Dr Shamas will follow with Aphrodite in an April guest blog.


Maggie’s blog on cultural myths is also relevant to me for how it will provide my readers with an insight into how thinking mythically and thinking politically hang together and how this matters to holding together or not holding together political tensions. Thinking politically, from mythical thinking’s point of view, archetypally inheres. At the same time, each kind of thinking hangs in its own darkness. In essence, this is Heidegger’s de riss, rift or rift-design. Mythically each of us needs the other’s way of thinking just as each needs her own mythical thinking’s point of view all the way.  Politics and myth need each other, each has psychic validity and each as a mode of seeing, apprehends the world—ways of being “in” the world. Politics and myth seem together and yet differently, to paraphrase one of Dr. Macary’s ideas.

The final thought I have as to my purpose for beginning with Dr Macary’s reverie on the myths of our culture is to retrieve and place here conclusions she reaches in her final paragraph.  It is my hope  we may continue to ponder them going forward.