WHAT IS THE ALCHEMY OF MYTH

From the perspective of the mystical function of myth, myth is a metaphorical system founded in primary states of awareness that the language of myth refers back to.
-Dave Alber

I introduced the core grammar of myth in the last blog titled: “What Is The Core Grammar Of Mythology?”

In plain language, thought and ideation — giving things names and living in a worldview of things with names — is understood as a secondary process of the mind, whereas simply experiencing life directly uninfluenced by that secondary process — simply being aware without naming what comes into awareness — is a return to the primary level of experience. In this context, the lines above from the Tao te Ching are meditation instructions… as are myths functioning from the grammar of the mystical function of myth!

Myths often refer to the heart as an organ of awareness that opens one up to the primary experience of life. As stated in the previous blog: Sympathetic awareness, empathetic consciousness, or knowing experience directly through the heart of compassion is highly valued and cultivated as a primary truth. It is the truth not to be forgotten lying behind all arguments or apparent differences within the interconnected continuum of all beings. This fullness of difference (what in India is called maya or “that which can be measured”) is indeed more deeply recognized as a stream of pulsating energy within which we participate in harmony (as manifestations of maya-shakti) if we make the upward moving recognition of this unified field of simultaneous energy and consciousness. We will perceive this same experience as disharmony if we are fixated in the downward moving recognition of difference, distinction, and separateness. For in polytheistic cultures the contextual appreciation of reality is alchemical.

The word alchemical is used in the sense of being psychologically transformational, of being mobile among states of awareness, and especially of being mobile in the world of forms while remaining grounded in an experience of life’s unfiltered primacy.

The alchemical/transformational nature of the mythological worldview is used — all over the world — as a communication medium for humanity’s shared eternal values. This is important because it is genuinely not that difficult to experience moments of enlightenment or eternal values on the meditation cushion, however it requires a deft stabilization of awareness in daily life to remain grounded in enlightenment and eternal values while moving through a world defined by socially communal constructs and names.

We take the world of names and forms for granted, but when we access the primary level of our awareness and then look upon the world of things, we realize that the habitual — un-mystical — worldview of things and forms is a secondary trance state. (It’s one of the six trance states described in the Himalayan Buddhist bhava chakra.) 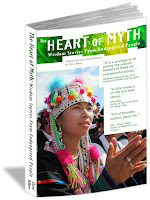 An alchemical recognition saturates the polytheistic mythological worldview. This recognition is of two movements: one upward toward unity and wholeness; its contrary force moving downward toward diversity, difference, and disintegration. These forces are represented in religious imagery in the Chinese Taijitu symbol of the yin and the yang and the Indian Shivite Hindu symbol of Shiva and Shakti represented as the upward and downward pointing triangles within the six-pointed star.
In polytheistic cultures, the alchemical model of these two simultaneous processes provides an accurate view of the transformations of life, wherewith one may experience the ephemera of one’s experience (whether animals, food, loved ones, and even oneself) transform from one process to another. It is also a model for recognizing and cultivating states of awareness while in this play of life.

In the alchemical model, states of awareness are appreciated as a regular, if not continuous, spiritual practice. The polytheistic community member “checks in” to recognize the state of his awareness in the moment. Is awareness and attention focused on selfish motivations that separate the community member from others (the downward movement)? Or is awareness and attention held in meditation on what would benefit the community (the upward movement)? In the later experience, the “community” can be as large as one’s worldview. Indeed, as large as imagination can make it.

The Eternal Values of Myth

The eternal values (or virtues) of love, joy, truth, peace, freedom, heroism, loyalty, and compassion transcend culture styles. For example, in India an understanding of the rasas, or “flavors” of life, is used as a spiritual compass. It is understood that the flavors of love, joy, and peace, if fully embodied, manifest as expressions of a transcendent recognition of reality.

The eternal values are, in a way, mediating forces between human experience and the mysterium tremendum et fascinans[2], but as with the virtues in Dante’s Purgatorio, they lead to the Absolute in the Paradiso. Medieval Catholic Europe held that the seven virtues (chastity, abstinence, liberality, diligence, patience, kindness, and humility) represent unchanging values that give confidence to the spiritual aspirant seeking fixed truths. The fixed truths are not that this or that historical event occurred with such and such results. But rather, that kindness exists—that it exists as an eternal value and that the eternal value can be drawn from and embodied. The virtue is a transcendent form with recognizable temporal manifestations. An aspirant can halfheartedly seek to embody a virtue and in doing so he symbolizes ambivalence more than the virtue he seeks. For again, from the perspective of these worldviews with more time and experience than our own—everything symbolizes!


These Medieval virtues were Catholic elaborations on the cardinal virtues (temperance, prudence, courage, and justice) of the polytheistic Greek worldview. Plato and Aristotle both wrote that to practice any one virtue to perfection would be to have mastered them all, and Socrates himself contemplated the virtues in many of his dialogues. Furthermore, the word virtue itself comes from the Greek ethike arete, which means “habitual excellence” and, as such, “is something practiced at all times.”[3] The virtues were a second attention practice in the language of the Buddhists. A second attention practice keeps the practitioner awake and aware of his or her state of consciousness by keeping secondary awareness on a visualization, meditation, mantra, place in the body, or breath. It is a type of mindfulness meditation. For the Ancient Greeks then, the practice of habitual excellence allowed people to act from a continually maintained core experience of eternal values.

Some spiritual practices in Chinese Taoism are comparable. In Chuang Tzu’s story The Sign of Virtue Complete, the reader is asked to consider the element water as a spiritual example for balancing virtues within one’s life. “What do you mean when you say his virtue takes no form?” a seeker asks a sage. The sage replies:  The sage replies:

“Among level things, water at rest is the most perfect, and therefore it can serve  as a standard. It guards what is inside and shows no movement outside. Virtue is the establishment of perfect harmony. Though virtue takes no form, things cannot break away from it.”[4]

In polytheistic cultures, the meditation on eternal values, understood as a continual awareness practice, creates balance. The maintenance of personal harmony is the base experience of most people in these communities.

The deities of polytheistic cultures refer, express, and manifest these eternal values. They are vitalizing energies and expressions of consciousness that, for the balanced individual or community, model appropriate responses to the rhythms of life, whether reflected in seasonal festivals or the transformations of the body in age.

The concept of the archetype, which is an indispensable correlate to the idea of the collective unconscious, indicates the existence of definite forms in the psyche which seem to be present always and everywhere. Mythological research calls them “motifs”; in the psychology of primitives they correspond to Levy-Bruhl’s concept of “representations collectives,” and in the field of comparative religion they have been defined by Hubert and Mauss as “categories of the imagination.” Adolf Bastian long ago called them “elementary” or “primordial thoughts.” From these references, it should be clear enough that my idea of the archetype—literally a pre-existent form—does not stand alone, but is something that is recognized and named in other fields of knowledge.[5]

Eternal values are inherent to all humanity. Without the guidance of such values, people become ambivalent, attaching their values to petty fads, opinions, and comforts. For certainly, as well as maintaining eternal values, the concerns of an individual or an entire civilization may very well be petty or middling. A people may say they stand for freedom, but if their idea of “freeing” the people of the hour means conditioning that population to be subservient to an externally imposed economic system and/or the acquisition of their resources, then their actual understanding of freedom is suspect. If people fool themselves on this point then they will suffer quietly, or at least unintelligibly, because they will have lost touch with the eternal values and forever mistake false values, perhaps misshapen and monstrous values, for the virtues themselves. With the loss of eternal values, they will act out merely as beasts mimicking the actions of men. Their greatest triumphs will be the winning of wars, the economic domination of others, and the acquisition of profit, power, or comfort.

The global civilization, at times, denigrates the values or worldviews of “primitive” polytheistic people. People in the global civilization after all, have an impressive worldview that encompasses not only the economically quantifiable material world, but also, more subtle and often surprisingly beautiful aspects of the entire universe as explored through myriad sciences. Yet, this civilization’s mass marketing of triviality has shattered its people’s self-recognition with the eternal values of myth.

Re-experiencing these values with an open sympathetic heart reconnects us not only to the people who transmitted their wisdom through their stories, but to our own depth, height, and breadth. We are returned to our most fully human context and we are able to recognize our lives in relation to profound life-affirming values. Communion with these values allows us to be effective, not as automatons serving a system’s agenda, but as vigorous human beings serving the fuller profundity of a responsive life.

[2] “Life’s awesome and fascinating mystery.” The Latin phrase was coined by Rudolf Otto in his book The Idea of the Holy. London: Oxford U.P., 1958. p. 12.
[3] Adler, Mortimer, J. and Charles Van Doren. Great Treasury of Western Thought: A Compendium of Important Statements on Man and His Institutions by the Great Thinkers in Western History. New York: R.R. Bowker Co., 1977. pp. 630, 634.


Dave Alber is the author of To the Dawn, Myth & Medium, and Alien Sex in Silicon Valley. His book The Heart of Myth is a global anthology of living myth that unpacks the grammar of world mythology. His website is DaveAlber.com and his English learning products are at EasyAmericanAccent.com.

Blog1
What Is Myth For You?

Blog 2
What Is The Core Grammar of Mythology?

Blog 3
What Is The Alchemy Of Myth?

Blog 4
What Is The Ecological Vision Of Myth?

Blog 6
The Myths Of The Crow (Apsaalooke) People