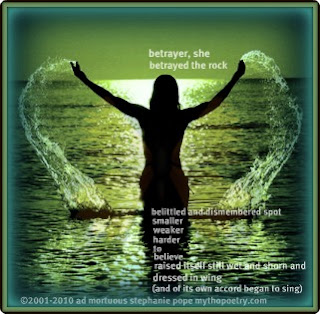 ...and the dead came back to me when they'd heard I'd found it

sitting on the rock sunning itself, a coiling unpinned


thing, a wing, burning and glowing
chorus growing in the water there on the rock like me
a loaded knot like me
unknotting suddenly and green; ascendant
in amphibian sing
coiling unpinned plopping
down (like me)

betrayer, she (betrayed the rock)

surely some tremendum is at hand

a night of madness in a drop
teetered there and clung to stone
until what shook began to rock
in rocking splendor terribly the moan
through frogs and toads and tatter
garment torn; belittled and dismembered spot
smaller, weaker, harder to believe
raised itself still wet and shorn and dressed in
wing (and of its own accord began to sing)

here is where is still the growing tree

her bright spot glazed in christic night
and in betrayer too, the wing eternal
danced das ding

in the speech
of man; O
shadow, slur this speech and stir

her death
came back to me and when it did
athanatoi came too;

the whisper full in emptiness
and sign; a glowing
darkly burning yet divine