IN THY SPIRIT KEEPING POETRY SERIES FOR DECEMBER, 2017: A POETRY TRILOGY 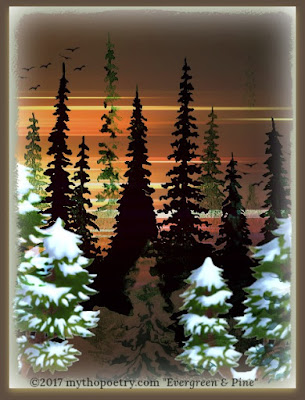 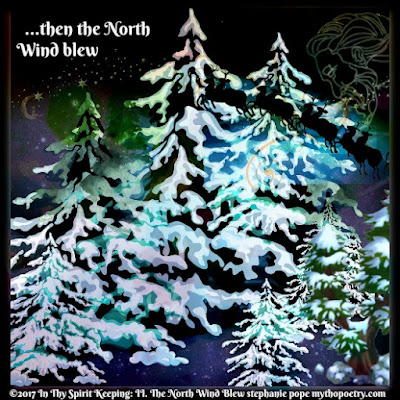 there I withdrew into night antlers
and slumber and then, the North Wind
blew

and the image
in my keeping
mounted heaven 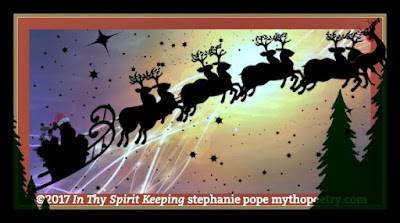 1. The major mythologem inspiring the poetry trilogy, "In Thy Spirit Keeping is the image of the Spirit of Christmas Present taken from Charles Dickens, "A Christmas Carol" re-imagined in the 1999 version  and portrayed on screen by Patrick Stewart.  Christmas occurs at a time of year when the sun is imagined weakest and life is most vulnerable. Our mythic imagination narrates how the light of the world is about to embark on a solar journey into night and the underworld this twelfth month and the world lay three times darkened.  It is the end of the harvest season and the beginning of winter.  It is the end of the day and moving toward night.  It is very near the end of the year.  The spirit of Christmas appears in the form of a Yule King jolly and giant and adorned in a holly wreath and green fur-trimmed robe.  He carries a cornucopia and an empty scabbard, the empty scabbard symbolizing good will and peace on earth.  In the excerpt you are about to revisit, the Yule King's dark hair is graying.  This is how one knows the presence is a reference to how things are in the soul of the man's world now and not some other year, era, or eon.  Also, when Mr Scrooge notices something hanging down by the hem of the Yule King's robe, he thinks it is something not human, as if like an animal's claw, i.e. as if bird-like and he thinks it is not part of the Yule King but that it belongs to him.  The Yule King says no.  The claw exists as a result of man's doing.  He lifts his robe to show two human-like children, ignorance, a boy and want, a girl.  And, I remember my Jung.  Psyche is at bottom nature. Thusly, the nature of my own psyche is reminded of its own return seasonally to nature's psyche for renewal forgetful of the world of men, which is culture and in this way I may tend to what pathos ails me ailing in the world of men.

2. I am reminded of the inner robe and the inner work which can be likened to an ars poetica.  Both images, that of the inwardness of presence addressing my own soul likend to that of Christmas present in the literary imagination of the tale and the treatise or literary essays by Horace on the artistic nature of poetry 18-19 BCE, turned again by Archebald Macleish somehow matter to the way these poems come to be.  I am reminded too of another way to envision "psyche is at bottom nature."  Psyche or "soul" is not in the body.  The body is in it.  So now the Yule King seems to be an embodiment of the suffering soul ailing in the man and this is why Mr Scrooge doesn't recognize his offspring when he sees them. And when he does, it seems a nightmare.

3. Two twitter poetry prompts precede working with this literary mythologem and these occur simultaneously within the days leading up to the Doug Jones/ Roy Moore vote in Alabama.   One prompt appeared as a trending twitter hashtag #OddReindeerNames.  The second prompt was #348 and included the words, before, shadowed, and filament.  One was not allowed to use the words in the actual poetry but use active imagination to see where they took one in the ars poetica.

4.  Another thought that stayed with me while I was letting the poetic experience envelope me was remembering that the Greeks believed a god visits one in dream.  This awareness was at the heart of the healing temples of Asclepius.  Jung has written that when a man's soul first appears to him in dream and active imagiantion it shows up with the divine presence.  Soul is not with man it is with god and god takes its form to speak intially to man Jung thought.  Something like this  psychological imagination is of what the scene Patrick Stewart portrays most reminds me.  Mr. Scrooge cannot run away.  The time has come for him to wrestle his soul from the Yule King so that he may carry its spirit with him throughout all his days.